Even though I don’t work in the world of vintage, all of the principles in this blog post apply to life in general. This post is fab 🙂 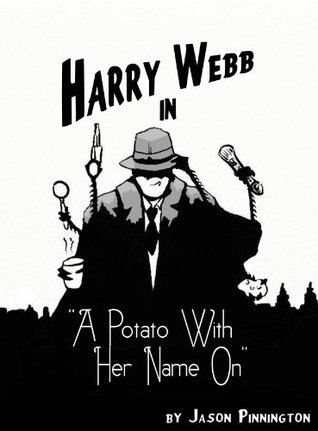 It’s been ages since I read a book I couldn’t put down, and so I was so excited (and annoyed when life got in the way!) when I started reading Harry Webb in A Potato With Her Name On. This is the Goodreads synopsis:

The name’s Webb, Harry Webb, spider and private detective. Most people find what I do exciting, chases, shootouts, chases, fist fights, chases, escapes – you get the idea, there’s a lot of chases. Not me, I prefer the stakeout, hours sitting on some Liverpool street watching, waiting, eating, drinking coffee… minimal fees, minimal risk.

Then a job lands at my feet, a job I can’t refuse because it’s the only way out of a hole I’m in. A high profile job for a high profile client, with secrets that need to stay secret. A job that’s tougher than an overcooked steak and keeps me looking over my shoulder at every turn.

As I start drawing up a list of suspects and motives, making more enemies than friends, I realise that my job isn’t the only thing at stake here… there’s my life…

Below is the review I left on Goodreads:

Now, I did come to this book thinking that it was simply going to be a children’s book (which I don’t tend to read), but I enjoyed it just as much as if it had been written for adults. The characters, especially Harry, are likeable and life-like and you really care what happens to them. It’s well written and is really funny, though some of the lines did make me groan, but in a good way.

Harry talks to you throughout the book, and I admit that I did hear his voice as one of the characters from Bugsy Malone (one of my favourite films!) which made me smile.

I know that Jason will be at the upcoming MerseyCon in Liverpool on Saturday 30th May, and in view of this, Harry Webb will be free to download as a Kindle title from Amazon on this day only, and will be available to buy in in paperback in person from him at the comic con for £5.

I’ve just read an article on the BBC News website about people who still use old gadgets, like black and white televisions, Polaroid cameras, landline phones, ZX Spectrums and typewriters.

It got me thinking as Michael types every fiction book onto a typewriter. I then scan the pages onto the computer using clever software that converts it into text, and then I build the book using the scanned pages.

Michael has been using a typewriter since I met him in 2008, so I don’t know anything other than the clackety sound the typewriter makes as he crafts his work. It’s kind of hypnotic and I love to hear it. If he’s typing, he’s happy, so the sound of the typewriter is happiness 🙂

I decided to interview Michael about his typewriter usage 🙂

How old were you when you received your first typewriter?
I was 17. My mum and dad bought me it because I really wanted one. I was writing short stories at the time and we couldn’t afford a computer, so the only available technology was a typewriter or a pen. Writing with a pen is exhausting. Not physically exhausting, though you can get cramp, but mentally exhausting because it’s so much slower. Writing something long-hand is so much slower than a typewriter, because you can’t write as fast as you think with a pen, to be honest you can’t write as fast as you think with a typewriter either, but it’s closer than a pen at least. Although, the typewriter I have written most of my books on isn’t my first typewriter. My very first typewriter was made by the company Brother, I think, but I may be wrong, and instead of a regular ink ribbon, it had a kind of a cartridge that contained a tape and the letters wouldn’t be transferred onto the page by ink transference, they would be stamped out of the ink and transferred straight onto the page. The advantage of that was you’d have crisp letters every time, the disadvantage was you’d only use the cartridge once, and a new cartridge was really expensive, so they sent that one back and got me an Olivetti Lettera 25 which I used to type ten of my first eleven books on. The Box Of Mirrors was written in pen.

What typewriter are you using currently?
Currently I’m using a Silver Reed Silverette II, because over the years certain things started to malfunction on my Olivetti. I was typing with it once and the spring that makes the ink ribbon automatic return mechanism work came unhooked somehow from inside the machine and shot past my head! Other bits and bobs stopped working over the years and so I needed a new typewriter. Unfortunately the Silver Reed has a very hard platern, which is the roller that the paper goes onto (I’m reliably informed it was manufactured with hard rubber), and so I needed to get another typewriter as it stopped feeding paper, and there’s only so much sandpapering of the platern you can do. When I have finished writing the book I’m currently writing on the Silverette II, then I’ll use my latest typewriter, which is, I think, my oldest typewriter in terms of when it was made, which is an Underwood 18, which so far has no problems. I will get the Silver Reed and the Olivetti fixed, but it’s a specialist job and it’s expensive, so at the moment it’s oddly cheaper to buy a new second-hand typewriter than it is to fix the one you’ve already got.

Have you ever considered joining the 20th Century, considering that we’re in the 21st Century, and using a computer?
I have tried to write on a computer, but the ability to edit the document as you go is apparantly too much for me to resist, and so I write a tiny little bit, and then spend three times as long perfecting those couple of hundred words, that will, inevitably, require editing anyway! And so, getting nothing done. Added to that though, typing on a computer, I just feel disconnected from the work. I think that’s because the work doesn’t exist physically unless you were to print it out; it’s just a document on a computer, and given particularly when I first started using computers, the grim reliability they had for crashing and losing all of your work, trusting the computer with the only copy of my book is far too seat-of-the-pants for me, so I prefer to get it down on a typewriter, and then have it scanned or copy typed.

Finally, will you always use a typewriter?
Yes. I’ve seen once there was a USB keyboard, I think it was, which was genuinely a typewriter. It was a circular key qwerty keyboard, that you plug into your computer in the place of an ordinary PC keyboard, so you could get the feel of using a typewriter, without having to reload the paper every 700 or 800 words. I wouldn’t go as far as to say that’s an affectatation, but it does seem a little bit like the person plugging in that keyboard would be yearning to use a typewriter, so why not do it anyway? Especially since optical character recognition (OCR) programmes are so easy to come by now, so it’s not as if typewritten documents need copy-typing, as long as your ink ribbon’s good and you’re a good speller.

I used to love writing poetry. Though to me, poetry needed to rhyme. I know now that poetry does not need to rhyme, but the word ‘poetry’ always makes me think of rhyming phrases.

With that in mind, here is my poetic offering:

Just Be
When it seems that life is getting too much,
And you can’t seem to struggle free.
Just remember that life is short,
And just be.

When it’s much too hard to get out of bed,
Or you go on a spending spree,
Just remember that life is short,
And just be.

When it feels like giving in is your only option,
I’m simply not going to agree,
Just remember that life is short,
And just be.

Inspiration struck me earlier, and I had an idea for a book poster, and here it is. Beautiful!